This feature is part of a Women’s Lives Women’s Voices series by Historian Dr Angela Byrne from Donegal, who pays tribute to Donegal’s Historical women.

Margaret ‘Pearl’ Dunlevy was born in Mountcharles in August 1909. She was the fifth of six children of the shopkeeper and merchant George Dunlevy, and his wife Maggie. The family were high achievers – two daughters and two sons entered medical professions. In May 1932, when Pearl graduated from the Royal College of Surgeons in Ireland, the Donegal News described the Dunlevys as a “brilliant Mountcharles family”. Pearl herself was certainly “brilliant.” She went to school at Loreto on St Stephen’s Green, Dublin, and at St Louis Convent in Carrickmacross, Co. Monaghan. From there, she went on to study medicine at the Royal College of Surgeons in Ireland. She graduated first her medicine and surgery classes in 1932. The education that the Dunlevy children received was remarkable for the time. In Irish national schools, girls were generally taught only basic arithmetic and domestic skills, and greater emphasis was placed on boys’ education; secondary education was limited to a minority, generally middle-class boys.

There were other barriers to be overcome, like the difficulties women had in accessing postgraduate training in Ireland. Pearl therefore left Ireland, holding surgical and physician positions at hospitals across the UK. She returned to Dublin in 1936 to study for a diploma in public health at UCD, again graduating in first place.

Pearl was temporarily appointed as assistant county medical officer of health in Donegal before becoming assistant medical officer of health in Dublin in 1938, based at Crooksling tuberculosis sanatorium. At this time, TB was rife in Dublin, and Pearl became an expert in childhood TB. In 1945, she established Dublin Corporation’s main TB clinic in Lord Edward Street. In 1947, she was made a Dublin Corporation TB officer and spent six weeks in Scandinavia, investigating the use of the BCG vaccine there. Tenements still existed in Dublin at this time, and Pearl’s research on the communication of TB identified overcrowded housing as one of its causes. 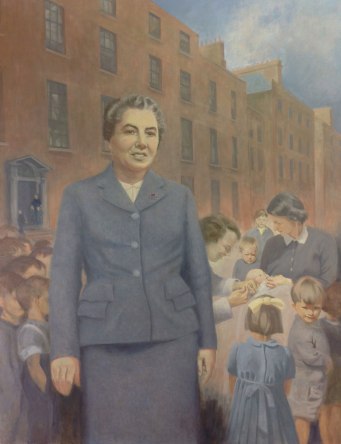 Source credit women on the walls at RCSI

Her reputation grew, and in 1948 she was chosen to lead a new childhood BCG vaccination scheme in Dublin. Within a year, the vaccination scheme, together with advancements in radiological screening and increased availability of sanatorium beds, reduced childhood TB deaths by two-thirds. Between 1948 and 1958, over 85,000 Dublin children were vaccinated, and only unvaccinated children died from the disease. The success of this scheme gives pause for thought, given the falling vaccination rate in Ireland today.

Dunlevy’s belief in the power of vaccination to reduce child mortality, and her concerns about falling vaccination rates, may have clouded her judgment at times. In the 1970s, she was involved in a trial of a combined diptheria, tetanus and whooping cough vaccine, known as the “3-in-1”. The vaccine was tested on 53 children living in five residential institutions. At that time, the consent of their parents or guardians was not legally required, but ethical, moral and safety concerns for those children were raised in the 2003 Commission to Inquire into Child Abuse. It is important that these concerns are recorded alongside any recognition of Pearl’s important achievements.

Dunlevy gained an international reputation for her work on childhood vaccination and public health, publishing papers in prestigious international journals. She was also the first woman president of the Biological Society of the Royal College of Surgeons in Ireland, in 1951–2. After her retirement in 1976, she wrote regularly for the Irish Medical Times. 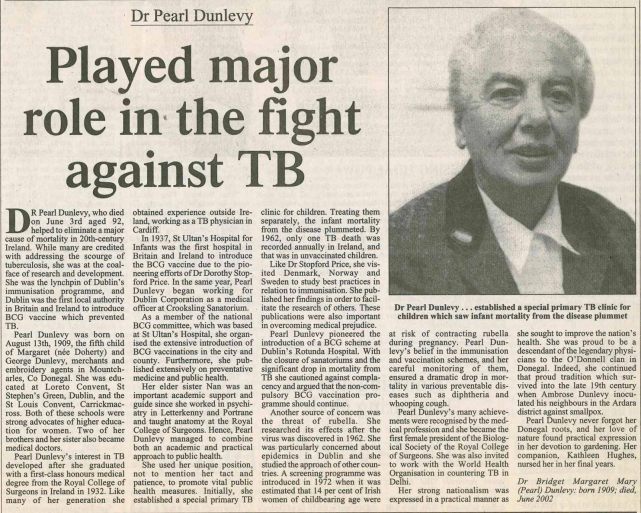 Source credit women on the walls at RCSI